Home invasions are timelessly frightening. Not only in reality but also in movies and television. The thought of strangers encroaching on your property, boldly stepping over that threshold, and doing harm to you and your persons — it is a universal fear that we hope never comes to fruition. The nearly forgotten anthology series The Hitchhiker, first airing on HBO in 1983 before moving to USA Network, tapped into baser human behaviors and paranoia. The show, also known as Deadly Nightmares overseas, was hosted by a wandering, tight-jeaned nomad (originally Nicholas Campbell in the first season before Page Fletcher took over). 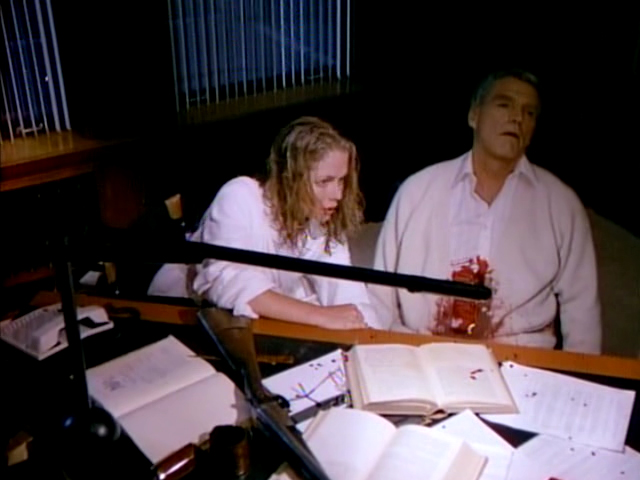 A standout from the third season is “Killer Me,” an episode with several writing credits. Directed by Carl Schenkel (Knight Moves), this perilous story finds a wealthy family at the mercy of an unseen intruder brandishing a shotgun and no conscience. The lone survivor is the daughter Meg (Jenny Seagrove), an invalid who wanders the immense abode in search of help. Rather, she comes across her loved ones’ killer — and their identity is shocking.

Right from the start, Meg’s family is shown to be caustic and insensitive. She’s in tears as they abandon her at home for their trip. However, Meg is the only one left alive as a mysterious and violent trespasser guns down her father, mother, siblings, and her nurse. She’s left bound to a wheelchair because of her illness — something her family considers an utter inconvenience — so the playing field isn’t level.

Meg is eventually confronted by the party responsible: her own brother Jonathan (Patrick Houser). As it turns out, though, nothing about “The Killer” is so clear cut.

This episode is firing on all cylinders and running on pure adrenaline. It moves briskly without sacrificing suspense; the tension is tight like a garrote. A number of Hitchhiker episodes have an unmistakable sleaziness to them that wholly reflects this era of HBO programming. Yes, there is some full-frontal male gaze going on here, but “The Killer” is chiefly about a disturbing case of disturbia.

A terrifying tour of the family’s blood-soaked mansion is what helps brings all the dread to a boil. A sinister score emphasizes the horror of the situation, and Meg’s actor delivers a fraught performance. The prize here is definitely the startling ending, which will catch credulous viewers by surprise.