Sometimes a twist is so good, you have to spoil it.

Not to be confused with the unrelated 1996 film of the same name, The Frighteners is another British anthology from the early 1970s. It did not have any sort of unique gimmick to make it stand out from the pack, but, so much like Tales of the Unexpected, it offered a devilish pivot in almost every story. 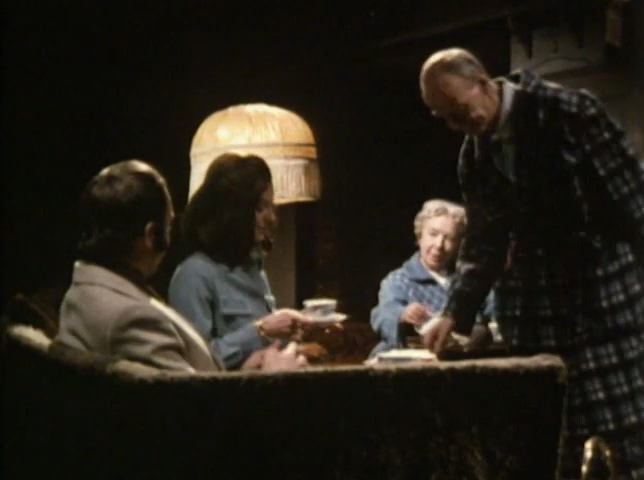 One of the show’s standouts is “Bed and Breakfast,” a misleading yarn about a couple in search of a place to stay one night. As they drive throughout the countryside, they spot a secluded bed and breakfast with an apparent vacancy. Once they awaken the owners, the couple is told this no B&B — the sign out front was mistakenly put there. Presumably, some neighborhood scamps were up to no good when applying the sign to a tree, Mr. Cartwright (John Welsh) explains to his unexpected guests.

Anthony and Olive Ashworth (Ian Hendry, Wendy Gifford) are not sympathetic and they are too tired to go elsewhere. The Cartwrights reluctantly let them inside and alllow them to sleep there for the night. Yet as they talk over tea and snacks, it becomes abundantly clear the Ashworths have an ulterior motive for this most rude awakening.

By now, audiences are feeling the unmistakable tension in the room. What exactly are the Ashworths up to as they prod the Cartwrights about their history? The old couple indeed once owned an inn before retiring from the business. So why was there really a sign saying otherwise on their front lawn? The questions raised are soon answered.

The episode sounds completely mild on paper with its drab setup. What cements this one’s status is its deliciously wicked reveal. The Ashworths delve into their own recent past — Olive’s father (Harry Douglas) had stayed at an inn some time ago and was subsequently left for dead nearby. The Cartwrights are appalled only because they recognize themselves as the culprits. To add an even darker shade to this already warped vengeance tale, the Ashworths bring in the victim, who has since been paralyzed by his ordeal. They confusingly agree not to go to the police about the matter, but there is one substantial stipulation: Olive’s father stays with the Cartwrights from now on, thus leaving the Ashworths effectively unburdened.

“Bed and Breakfast” goes from lukewarm to boiling. It’s primly depraved without resorting to any violence or vulgarities; the pacing is deliberate and adds to the overall effect. While the story has a matter-of-fact tone to it, the odious outcome redeems that minor flaw.