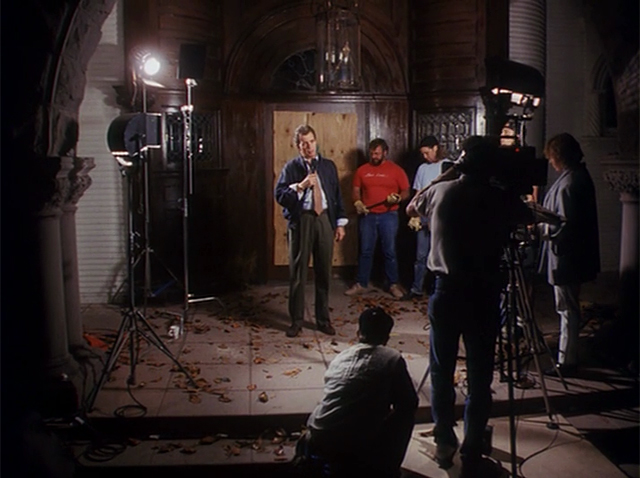 Tales from the Crypt is one of the few horror shows to have a lasting effect on pop culture. The Cryptkeeper is an icon who so many adults remember even years after the show ended. Although the legal issues surrounding the series keep it from entering the streaming age, the memories it created still remain in our twisted hearts.

Season Two’s “Television Terror” sticks out because it was one of the few Tales from the Crypt episodes that earnestly tried to be scary. Much of the series was darkly comedic and irreverent, after all. That’s not to say those kinds of episodes are bad, but this one makes you hold your breath until the very end.

After yet another one of the Cryptkeeper’s pun-filled introductions, we meet Horton Rivers (Morton Downey Jr. practically plays a parody of himself), a television shock host whose reputation precedes him. In a ploy to nab some ratings and further tantalize his viewers, he brings his film crew to the notorious Ritter Home Boarding House where its matriarch, Ada, murdered the elderly residents so she could steal their social security checks. Although the staff wants the host to spice things up to improve viewership, it becomes clear the need for embellishment is unnecessary. For Ada Ritter still roams the grounds — and she’s about to give Horton Rivers’ audience a show they’ll never forget.

Looking at it now, something like “Television Terror” was ahead of its time. The episode is partially shot in first-person to give it a real-time effect that so many found-footage movies use today. Of course, we’re never led to believe any of this is real, but the idea is essentially the same. A complete house tour with running commentary from both the host and his producers builds rich suspense. As Horton introduces each new room to the audience, his entrances are prefaced by flashbacks of Ada’s grisly crimes. The inevitable is under way and those at home can’t wait to see it all unfold.

This is Tales from the Crypt at its best. The loathsome main character gets his comeuppance, the anxiety is palpable, and the outcome is ghastly. It still has that trademark, morbid charm that the show’s fans have always loved. Yet, by emphasizing the spookiness that was sometimes overshadowed by the overall comedic tone, “Television Terror” breaks away from the usual format and reminds us why Crypt is a top-tier horror anthology.

Thank you to everyone who read and enjoyed these entries. As you can see, both television and anthologies are important to me. They were — and still are — a respite in my life.