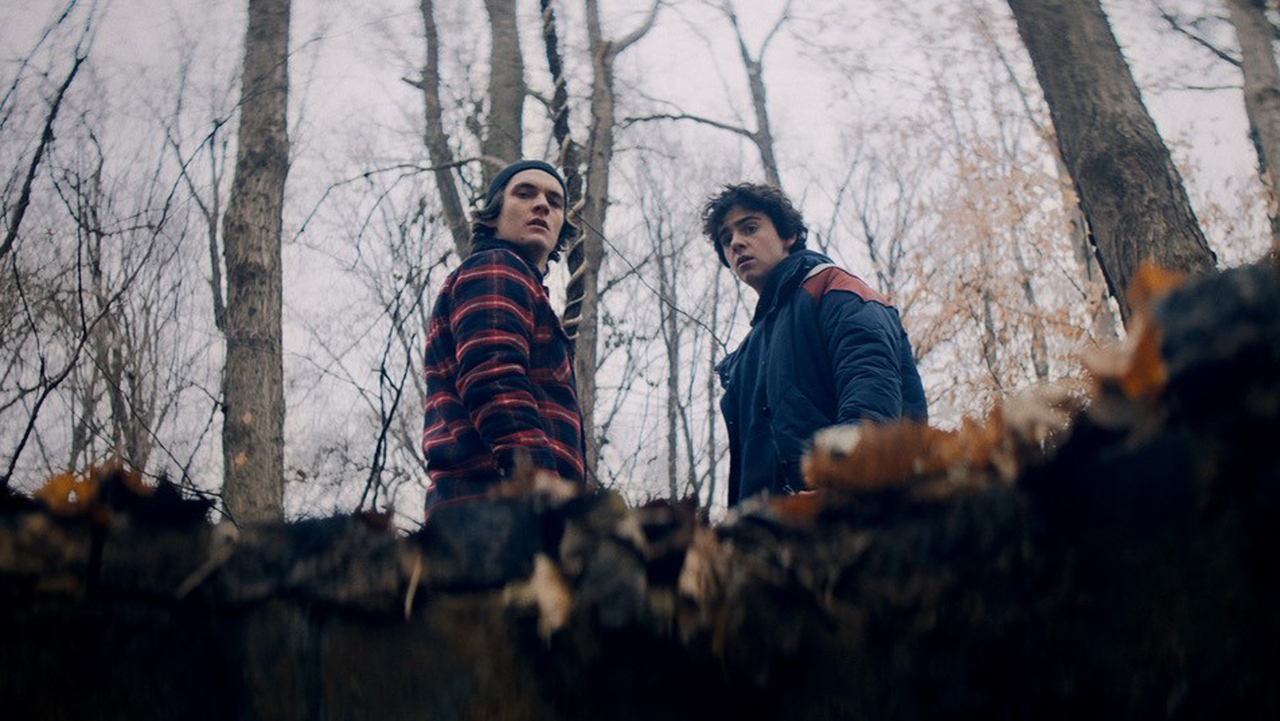 A security guard in the wrong place at the wrong time, tells a 15-year-old boy this as he sits in a hole with no means of escape. He hopes to appeal to his teenage captor’s conscience, but in time, the boy realizes things are not what they appear to be and perhaps he’s made the right decision.

It’s a bleak life for Joey (Jack Dylan Grazer) and his older brother Matt (Fionn Whitehead). Their deadbeat, abusive father is no more, their mother (Mena Suvari) is gravely ill with lung cancer, and in general, they’re running out of money. This leads to the siblings robbing an elderly woman’s house while she’s away; they escape only to be pursued by a security guard named David Hamby (Rainn Wilson). The chase through the woods is short seeing as the officer falls down a deep hole and injures himself. Joey’s guilt gets the best of him as he then repeatedly returns to check on Hamby despite his brother’s warnings. Although the teen has no plans to free the stranger just yet, the two form a curious relationship.

The plot for Don’t Tell a Soul suggests a greater level of depravity that’s never quite seen in this dreary thriller set in Anywhere, America. Both the virtually colorless palette and working-class milieu penetrate a story that’s not as profound as the aperture that traps Wilson’s character. Even so, there’s some effective symbolism about power struggles going on. The two young protagonists are scraping by with only one parent, a sick woman confined to her couch, after their drunkard of a father died not too long ago. Matt claims the robbery was for their mother’s benefit; that’s not remotely true. He’s the earner in the family now, but Matt, in his own words, shouts “I didn’t know how” when explaining himself to the brother he regularly smacks around and derides. By this, Matt is too overwhelmed by the system that failed him and his family. Getting his hands on that $10,000, though, provides a temporary boost of confidence when he’s really just as scared as everyone else who can’t pay their bills in this town.

Then there’s Joey. He’s supposed to represent the more morally capable of the two brothers. As we get to know him, however, it’s evident Joey’s not as sound as implied. He’s the one who goes back to the hole to check on the security guard; he brings him food and supplies as opposed to getting him actual help. Your heart bleeds for Joey as he wants to be a good son, but helping his mother means staying stuck in a bad situation. Matt frequently mistreats his younger brother; even goes as far as try to pin the robbery on Joey in front of a biased audience. The apple doesn’t fall far from the tree. So for Joey, the power disparity is literally at home, and it only makes sense that he does what he does later on in the movie. The victim can only stand so much.

Rainn Wilson’s character of David isn’t exactly a cop, but he represents authority and he has some influence over the boys’ fates if he gets his way. Keeping him in that hole is Matt’s mode of sticking it to the supposed good guys who weren’t there when his father got rough. So as much as you try to sympathize with Matt and Joey, they succumb to the same problem as those above them: power corrupts and clouds judgment.

The movie offers up a cunning plot twist that changes everything for the better. At this point, you can only guess what happens as developments aren’t as predictable as they might seem. In fact, the ending is rather startling because the person who ends this whole mess is the one who’s been burned the most in life. Everything comes together a bit too cleanly for my own liking, but it’s a satisfactory way to resolve the more pressing personal arcs.

Don’t Tell a Soul is more than just two youths making a bad snap decision. They actually make a number of them; which helps the movie skirt by so definitely. I was never bored and underwhelmed, nor did I feel certain events were foreseeable. Alex McAulay‘s feature debut as a director largely functions as a nimble and fair thriller, but there’s some heart to the story, as well.