Creatures that go bump in the night are front and center in Monsters, a 1988 anthology that ran for three seasons and 72 episodes. This series of standalone frights bears a striking similarity to Tales from the Darkside, but that’s mainly because they share a producer, Richard P. Rubinstein, and production companies. Unlike its predecessor, Monsters is purely horror with an emphasis on demons, ghouls, and other nightmarish entities whose names we dare not speak. 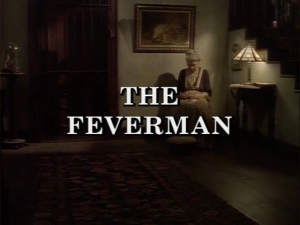 A desperate father brings his sick daughter to a feverman, a type of alternative doctor whose methods are highly unorthodox, to say the least. The father’s colleague, a medically trained doctor, is skeptical until he realizes the girl’s malady isn’t natural—it’s supernatural.

Based on the show’s opening sequence — a macabre twist of all-American families sitting down in front of the boob tube, just in time for their favorite show — you would expect the first episode to be, well, cheesier. The Feverman feels like an anomaly in the series, but that’s not exactly the case, as we later learn. It just so happens to be grave in tone with no sort of humorous break. Everything is played straight—from the dialogue to the imminent threat.

Starting the series off with a period story is bold, but the Victorian setting adds instant atmosphere. The sepia palette evokes nostalgia for a time of dated ideas and practices. The fabricated mythos of faith healers who battle physical manifestations of disease is intriguing enough for a longer feature. The truth is, there’s very little here that does not work.

As the feverman (David McCallum) staves off the demon causing the child’s sickness, he butts heads with a modern doctor (Patrick Garner) who understandably questions his methods. Fevermen are fictional, but quackery is not. Back then, of course, it was easier to convince someone their disease was the result of evil rather than pathogens.

Naturally, people want to believe in the good of others. It’s how one survives when terrible things happen all around us. Be that as it may, it just wouldn’t be horror without some kind of unfair turn of events. The cost of resolute faith is often a high one, especially for our titular hero and the man who questions his motives at every turn.

Almost makes you sick just thinking about it, huh?

This fleshy, fearsome demon (physically played by Katy Dierlam) is simply referred to as a ‘Fever’, which might only be a generic name for any kind of materialized disease. Don’t be fooled by its rotund appearance as this fiendish affliction is quite spry and formidable.